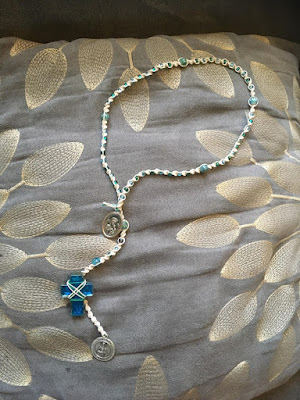 This rosary was gifted to me by a friend of a friend (who has also become a friend - though she lives in the States, so I keep in touch with her online).  She is working to become an Anglican priest, and as a hobby she likes to weave rosaries and gift them to people.  Because I tend to pray the Catholic version, she made me this St Jude themed Catholic rosary, complete with a St Jude medal hanging from the cross portion.  Prior to owning this, I would use some cheap boring rosaries that were pretty typical looking... this one is much nicer.

A friend of mine and I are such spirituality nerds that he sometimes texts me to invite me over to pray the rosary, and I respond with "Fuck YES... I'm fucking AMPED for that.  Lemme grab some WINE!" - some people get together to smoke dope, play video games, run a DND campaign, or have casual sex - we do Druidry rituals and pray the rosary.  Interesting what he and I consider fun, I know... at least it's a cheap hobby.

Often when I start the ritual of the rosary, I will utter several prayers to various sources at the crucifix portion, to set my intent for the prayers.  I have memorized most of the ritual, just the Apostle's Creed is a bit tricky for me to remember.  Sometimes I pray it at the cathedral with everyone else there in unison, but usually I just like to do it on my own, or with my friend the Anglican Druid.  It's been a while since I have, I have kind of taken a break from it.  Gotta be in the right mood!

(This rosary was also something I carried around with me at the convent - I wonder what those nuns thought of me, honestly... one time during silence at meal time, I started snickering because of some oddness popping into my subconscious, and tried passing it off as a hacking cough... how embarrassing!)

I'll probably post some articles on other things I tend to use ritualistically, including the smudge feather I made that helped me destroy my demon.