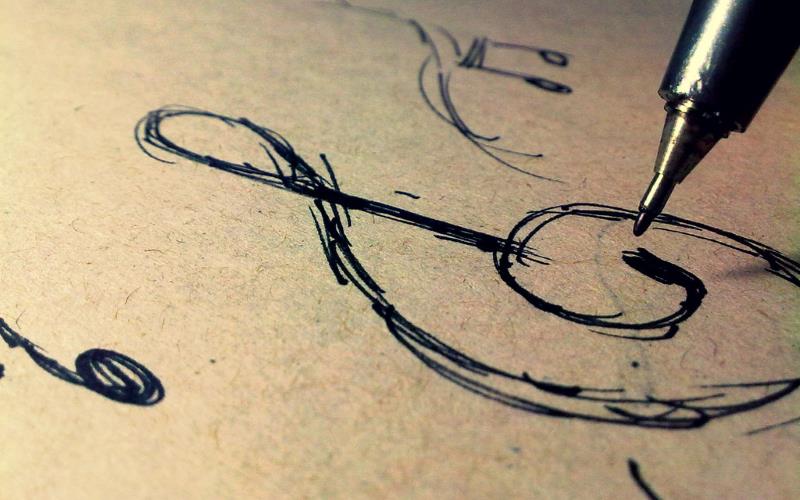 Automatic handwriting (or spirit writing) is one of the channeling gifts that I have been developing for many years.  Basically, as one could imagine, it equates to allowing unseen spiritual forces, or the unconscious, to take control of one's hand with a pen to write messages.  I also receive automatic drawings a lot, some of which I have discussed here before.

It all started back in 2006, when I was puffing away on a joint.  My right hand lurched up on its own and began gesturing like a ballpoint pen being clicked, indicating that I should pick up an implement and start seeing what came out of it.  My hair stood on end at the time, but I am so used to this now it's as natural as breathing to me.  In the beginning, the messages were a few words and squiggles mostly, but since working on myself and ridding myself of much of my spiritual problems, I now receive complete sentences and passages.  It's a sort of guidance to help me know what to pray for, to encourage me, and to give premonitions of events to come in the near future.  Often these premonitions are accurate.

Today I experimented with automatic handwriting at the cathedral - since tarot cards in a Catholic church is a recipe for disaster, having a notebook looks like I might just be journaling.  I found the "spiritual reception" to be even clearer in this location, due to the amount of devotion and spiritual service that goes on there, I'm sure.  It's probably going to be something I do often now, nobody could tell I was channeling notes, tarot cards would be way too obvious and I might even get scolded or kicked out if the wrong person saw me using them.

Some of the regular symbols I receive through automatic drawing include: the cross, the cross in a heart, the Eye of God, the Eye of God with beams coming from it, the spiral of Akasha, the Infinity symbol, the Eye of Providence, the Chi Rho, the Star of David with an eye in it, a smiley face (I guess to indicate that all is well), the Medicine Wheel, and a series of other symbols, both religious and non religious in nature.  It feels almost like a kind of game of Pictionary with the Spirit, trying to make sense of what the messages are trying to tell me, as I also fine tune my vocal channeling.  Vocal channeling, BTW, feels like a kinetic response in the body where the mouth forms and speaks words on its own, the ego not involved as it steps aside for a moment.

Right now I seem to be overcoming a lot but also fine tuning, as I take on and develop new skills with this.  It will be interesting to see how far this takes me - some very powerful psychics I know already say I'm pretty darn good, and I only opened to the Akashic Records a few months ago!