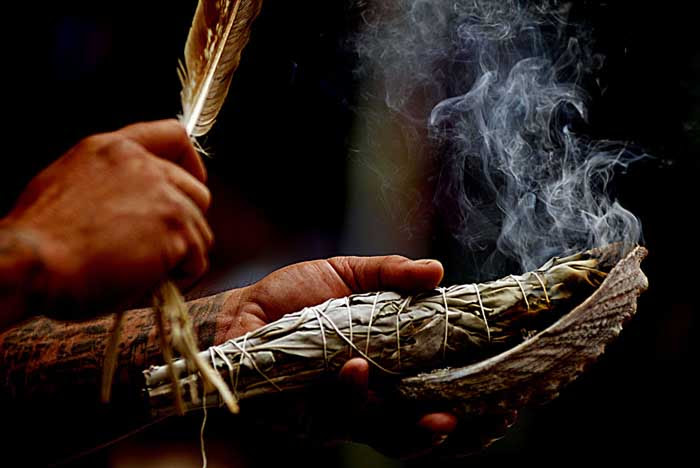 Thought I'd do a quick little post on the topic of smudging, something I practised ever since a First Nations family friend recommended I engage in it regularly, throughout my struggles.

The subject of cultural appropriation is a big deal on the web these days - some of it I agree with, some of it I think is going a bit far, and is stifling the "rules" about what creative types are allowed to engage in when expressing themselves, as an example.  Anyway, it's interesting to note that the only people who have ever given me a hard time for using smudge plants were non-First Nations, usually whites... First Nations people themselves all seemed to encourage it.  So shut up, whitey... apparently, we're all supposed to do this if there's a need for it!

The first plant I experimented with was the standard - white sage, burned in an abalone shell gifted to me.  White sage is a powerful clearing agent, but also good for cleansing the energy field, kind of like a spirit bath.  I burned a lot of this, and though the spirit within would writhe when I did so, it would never leave.

I also "smudged" a lot with dragon's blood (I say this in quotations because it's a resin, not plant leaves, so I had to burn it on a charcoal), which also seemed to cause the spirit discomfort - imagine Linda Blair writhing in The Exorcist when the priest splashes holy water on her... that kind of reaction.  Also tried were cedar, palo santo, and on and off I played with sweetgrass.

It was only this year that I experimented with a smudge mixture I concocted I liked to call "Die, Devil, Die" (though perhaps "Devil, Get Out" would have been better, considering it was probably better suited to driving evil out, rather than destroying it) - the mixture combined white sage, cedar, palo santo chips, and dragon's blood (and eventually copal added as well), which I ground together with a mortar and pestle, and burned over a charcoal, wafting it all over me with a decorated stray hawk feather I, oddly enough, found on the streets of Toronto.  Though this seemed to really torment the spirit, as it would scream through me, and cause my body to convulse and writhe in reaction to it, it didn't ultimately get rid of the problem.

I remembered I had a braid of sweetgrass, a plant I hadn't used much for smudge.  Sweetgrass is known more for letting positive influences in, rather than driving negative influences out.  So I prayed to invoke as much aid as possible, and smudged with that several times - suddenly, those bliss states I had described in previous posts came over me, through anahata chakra, and it seemed as though change was imminent.  Before bed, there was that glorious Eye of Providence vision that had me cry out "oh my GOD" because of its intensity... I suppose that was a signifier that things were now going to finally get better.  I needed to let good spirits into me, to destroy the bad.

It still feels like it's gone... there is a mild anxiety to me, because of how long I have been fighting this, but so far, so good.  The real test will be coming down off of medication, but I don't want to start doing that until I am at a slightly higher developmental level, so I am less within the mind over this.