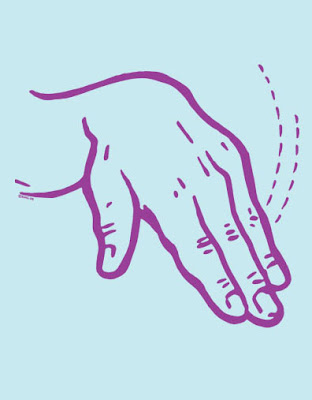 I have always been a fag hag (or "fruit fly", if you like the more cryptic, politically correct version)... of this I am certain.  My dream car as a preteen was a vintage yellow Mazda Miata... my favourite band, the Pet Shop Boys (they still are).  (Actually, I spent most of my teen years at the "wrong" end of the 90s spectrum of music - it was all about eurodance, some britpop... a bit of alternative, but mostly I wanted a catchy bassline and some synthy melodic formula with banal lyrics to dance to... it was only long after the 90s were over that I discovered I actually did appreciate a lot of what grunge had to offer.)  In my locker in high school, I had pictures of David Hyde Pierce up, as well as European fencing champions (they have nice asses), instead of Brad Pitt or some other boring straight guy.  Most of my crushes have been gay men, or at least men who seemed gay, or were countercultural in some way, or quirky or cultured or unique or somehow different.  In fact I have been so obsessed with gay men I was convinced I WAS a gay man in a straight woman's body, had a resulting genderqueer phase, but grew out of it as I embraced being a woman, but a very, very lonely woman who finds the "available" men who might actually consider me attractive to be unbelievably boring.  Also, straight guys have a tendency to treat me like a used condom - once they are done using me in some way, or if they can't get any use out of me at all, I am disposed of immediately.

Don't get me wrong - straight men have made fantastic friends.  Some of my finest pals have been hetero guys... as long as it stays platonic.  They are very good at helping put together IKEA furniture, moving couches, they make great drinking buddies, they give me a run for my money in a belching competition, and they even have a sweet side, often enough.  There's also nothing more riveting to behold than a straight guy singing his heart out to an Erasure song at karaoke... gay guys give an honest, sincere performance, but straights are just hilarious about it.

But many straight men who are looking for love, far too often enough, want a woman who, let's face it... isn't quite as SMART as they are.  I have noticed gay men often love the company of big, bold, funny, intelligent women... that's kind of how I am, personally.  I have come to the realization that if I ever am attracted to another man again, it will likely only be to a gay man.  I just don't trust het males at all now.  Also, being asexual, there's no pressure for sex from a gay man... even a bisexual might crave it from me, a gay man likely wouldn't, and I would have no problem with him going off to fool around with a boy toy on the side.  I would make a proud, happy Beard.

I jokingly refer to myself as "God's Fag Hag" on here because of some wild visions I had one time while smoking a joint.  I immediately saw a limp wristed Hand of God extend from a set of clouds, followed by a sassy lisp, commanding a rather flamboyant version of the Pope at the time (it was Ratzinger) to come out of the closet.  It was among the funniest visions I have ever had, so I put on some Pet Shop Boys remixes and watched the Pope figure dance to it.  No wonder I got so hooked on weed for a while!  *_*

It is my hope that, if I become a top notch professional tarot card lady, it will be the kind of camp, novelty schtick that would attract a gay male audience, and I might actually find a nice lad to laugh with over the absurdity of life.