Why I don't identify as "Mad" anymore... 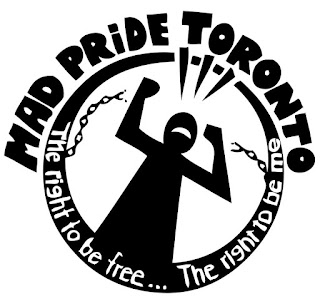 I no longer officially identify as "Mad".  It's not to say I reject the message of Mad Pride now, I still believe in it when it's spot on (though a lot of bullshit awareness-y crap has corrupted its original message in recent years), and I still consider myself at least an ally, if not a former Mad person.  Also, I plan on completing my Mad Pride comic series, Asylum Squad, which still has a strong Mad Pride message.

But - it's like this.  My Jungian analyst planted a seed a while back that I should stop calling myself Mad, because he said "it's not right - you're not actually mentally ill, why identify with that?"  My rebuttal was that it was more of a political identity because of having been psychiatrized to death, it was my way of finding empowerment after being stripped of it so badly.  Certainly I seemed Mad for a while - I see the world very differently from other people, and because of spiritual problems, I was in near constant psychic agony for a while.  Also, I have been on a medication to calm my neurology so that, while the phenomena was still happening, it was at least slightly quieter.

But the frustrations of trying to have a voice in the art world without people calling me a "schizophrenic artist" began to get to me, and I started to see his point.  No matter how many times I tried explaining things, no matter how calmly, no matter how many specialists I have cited whom I have seen, including my current psychiatrist, who have said I do not have that disorder, or schizoaffective disorder, or any true DSM V based psychosis, it seems like some people just won't listen.  Look up my comic and a bunch of shit will come up about schizophrenia along with it.

Look, I know that diagnosis was discussed a lot in "The Psychosis Diaries" (my first graphic novel, which I have since pulled from the web, ceased to print, and in a way have distanced myself from), but honestly, that came out of being trapped in a facility for a year where every day they'd basically try to brainwash me into believing that was my problem, even though deep down I knew my problem was actually in some ways much worse, so of course it would affect my art, and my confidence in my own intuition.  Hence, this is why I choose not to publish that body of work anymore - it simply does not represent me or my suffering very well at this point.  I don't disown it, I still take some pride in having made it, but at the same time... no.  That book was an interesting experiment at a troubled time, and that time has now passed, onward and upward.

Having had incredible successes through spiritual practices like prayer and meditation (but especially with prayer) in improving my consciousness, it is my firm belief now that the brain is the processor of consciousness, not the generator of it - it is to consciousness what the lungs are to oxygen.  If the brain is ill, consciousness is going to feel off, but after reading "The Brain That Changes Itself" by Norman Doidge, it's interesting that people with crippling neurological problems, stroke survivors as an example, have been able to find ways of rewiring the brain with therapy, so that even a severely damaged brain finds a way to function again, despite its damages.  How else could this be possible except without the soul's involvement?  I seriously doubt psychiatry is going to get anywhere, really, with the brain sciences, until they really begin to acknowledge the existence of the soul.

My psychiatrist (I like to call her my own personal Dr Gabor Mate) is not only a psychiatrist, she is also a neuroscientist, has worked in neurosurgery, and she teaches yoga.  She has got such a broad understanding of consciousness, she outsciences most psychiatrists at their own game, yet she believes in the soul, and knows how important it is to be spiritually healthy.  It can affect everything.  I suspect that most people who think they have this or that disorder, who think they need this or that medication, might have healthier brains than they think they do, and it may be a case of a spiritual malaise, as a root cause, or perhaps dis-ease with the structure of our society, or upset over the pains of the world.  Certainly, I have a big problem with the Cartesian idea of "I think, therefore I am", which places a conscious burden on ego, leads to things like materialism, and does not consider the other layers of consciousness beyond the egoic mind. This philosophy has lead to overthinking in many humans, the western world is riddled with neurosis, it can exhaust the brain.  Descartes... not my favourite philosopher of all time.

No matter... I will probably still have to live with a lot of people misinterpreting my work, my message, my personhood.  People romanticise the shit out of mental illness, which really bores me.  Can we move on to more interesting ideas, PLEASE?  Hopefully the final message of my comic, when it comes, will be understood.  Then I will likely never touch the subject of madness ever again.