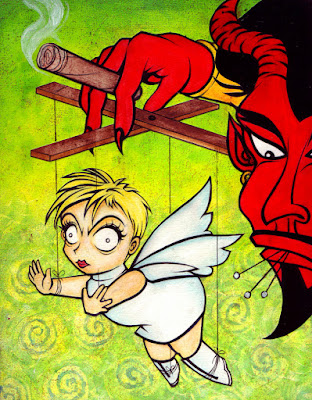 Here's a fun one I did a while back, summing up how I felt about my situation.  Kind of reminds me of Spumco art a little bit.  I gave this away as a gift to a television director I am working with on an Asylum Squad short film.  (I announced that years ago - we're still trying to figure out how to work the budget and edit scripts... film takes a while to get moving sometimes.)

The background is acrylics on canvas, the foreground a collage layer with pen and water soluble wax pastels.