'The Story of a Soul' by St Therese of Lisieux... 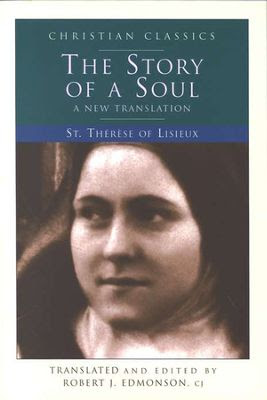 I bought this one at the local Catholic book and gift shop (which I love to raid for religious kitsch, like an otaku with anime goods - I am such a weirdo).  I love reading about the saints, their mystical experiences and struggles.  St Teresa of Avila, another famous Carmelite, was one whom I had already read some of the writings of ('The Interior Castle', specifically) so I saw this on the shelf and thought to read about another beloved saint of a similar name.

I read it all within the day I bought it - it's a very easy read, and quite an interesting story.  But man, is this girl ever Catholic!  Holy shit.  "The Little Flower", as she is known, always speaks here of how flawed she is as a person, while simultaneously painting the portrait of the perfect Catholic girl, and one comes away reminiscing about everything wrong they themselves have ever done, thinking: "C'mon, hon... you're really not that bad!"

Some of the spiritual horrors she mentions remind me a bit of some of the things I went though, the details she describes I mean - though it doesn't sound like she was ravaged by evil like I was, merely haunted... she was smart enough to pray sooner, I guess!  And she describes an incredible healing encounter with the Virgin Mary that's quite interesting.

She died at 24 in her convent of tuberculosis, something she was oddly excited about when she began to fall ill (but to her, it was a time of being united with her Beloved).

Her desire for suffering was intense, almost masochistic, I personally am sick of suffering (though, in a way, I guess I can see how some suffering can strengthen the soul, provided one is eventually liberated from it).  (Also, I have actually desired the stigmata... yeah.  I know that sounds like some fucked up goth girl Judy Blume novel shit, and I would probably have to fashion fingerless gloves out of THINX period underwear so as not to get formed for "self injury", but it would be a great conversation starter with the right group of people, as well as interesting material for this blog!)

All jokes aside, I enjoyed this.  I brought it to my mystical book club at the United Church for discussion (we started one).  Now, I need to finish my copy of 'Dark Night of the Soul' by St John of the Cross.  Shit got real interesting with tarot so I have yet to pick it up again to finish it.