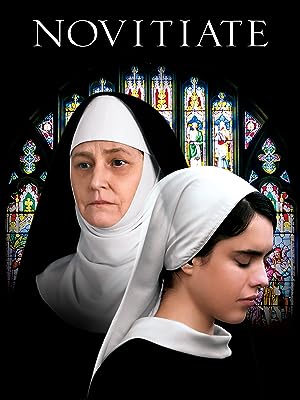 Time for a film!

This is one of my faves to come out in recent years, at least in relation to the subject of religion.  My mother saw this on her Apple TV and suggested it, and I'm glad she did - it's a wonderful film.  It tells the story of Cathleen Harris, a teenager growing up at the time of Vatican 2, when the Catholic church was overhauling itself to get with the times, as it were.  She gets the call to become a nun, and ends up joining a religious order called the Sisters of the Beloved Rose (which I don't think is a real order, nor does my Mom, who was raised Catholic - I was raised Anglican, though we didn't really practise much).  She must go through the Postulant and Novitiate phases before becoming fully ordained.

Meanwhile, the convent is run by an impossibly strict Reverend Mother, brilliantly played by Melissa Leo, who is upset by the changes with Vatican 2, and insists that things remain as they were - she even encourages extreme acts of penance, like flagellation, for the Novitiates.  For a film set in a convent, it gets pretty intense, and there are many great scenes - this is not a boring film, even though it's about a bunch of nuns!  The soundtrack is beautiful too, and I was finally able to locate it on Spotify, though I could not find it for download on iTunes or anything like that.

I get the sense that although there is quite an anti-Catholic vibe to this movie, the film is not anti-God, and I won't explain why, because that will spoil it for anyone who wants to watch it.  When I was debating becoming a nun (I was considering Anglican, though, not Catholic) this film made me both want to investigate further, but also reconsider the idea.  Then I stayed at the convent and it was clear - nope!  Poverty and chastity I could easily swing, but obedience - I am too punk rock to pull that vow off.  I will visit again as a layperson, but I will not become a nun.

So yeah... highly recommended, this one.  It probably pissed off a number of Catholics, in fact I know it did, but it's quite compelling and beautifully done.  (BTW, when I say I identify in some ways with Catholicism, it's complicated... I feel drawn to it somehow, even though there is a lot of it I don't like, in relation to politics and so on - I am pro gay marriage, pro choice, stuff like that.  It's the ritual, the saints, the mystics, the faith, not the church or the politics of Rome itself, that I am drawn to.)