"The Last Temptation of Christ"... 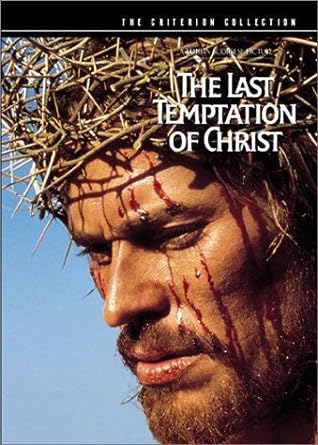 My parents, both theatre hippies, had me watch this (at least most of it - not so much the sexy scenes) when I was 12 at Easter time.  At first I was groaning about being made to watch a Jesus movie, but I actually really enjoyed it.  Years later, as an adult, I bought a copy of it, and its accompanying soundtrack (by Peter Gabriel) at the Yonge st HMV before that store closed for good.

This is a movie that was rife with controversy for portraying Jesus as a man with human frailties, as much as he was portrayed as a holy man.  The Roman Catholic Church HATED it, for one.  I, personally, like the idea of a Jesus with these more human qualities, it shows his suffrage as a human, makes him more likeable as a character in a film.  In my writing classes with Ty Templeton, we learned about the four basic protagonist archetypes of writing (at least in comics) - the Hero, the Anti-Hero, the Everyman, and the Misanthrope.  Although Christ is still ultimately a Hero in this film, there are times when he presents a bit as an Anti-Hero, and in a way it makes him even more likeable.

I have a theory about the controversial scenes at the end of the film, when he appears to be "rescued" from his messianic mission by an angel, and led to a better life, which turns out to be a trap.  He's not chickening out at all - he has descended into hell, and the fear that he has failed God is his suffering while there.  If angry Christians would see it from that perspective, they might be less offended.  What could be a worse kind of hell for Christ than to feel that he has failed in his duties?  It's at the very least an interesting interpretation.

The soundtrack is Peter Gabriel gold goodness, and I highly recommend that as well.  Kind of a mix of both middle eastern sounds and slightly more pop sounding stuff.

The movie isn't absolutely perfect - the American accents are kind of odd to behold in a movie set in the middle east, and there are a lot of caucasians playing Arabs here.  But Willem Dafoe will forever be my favourite white guy Jesus, and the Dafoe comes out here and there, especially in the scene where he has a fit in the temple.  ;)