That time I made a video game... 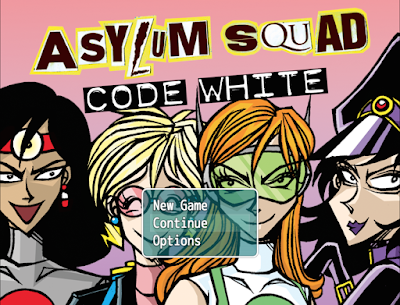 A couple years back, I downloaded 'RPG Maker' and had some fun with that, making a little RPG based on the first act of my comic.  I would have continued with it, however, the amount I would have had to learn about the software, and the amount I would have to do to pull it off properly probably would have exhausted me, and generally I like to avoid using computers as much as possible (they frustrate me a lot).  So, the game became a free downloadable teaser for the plot of the comic, and is available here.  (Also, I borrowed music from sources online that would likely require me paying up if I were actually making money off of this thing, so making it a free game meant I didn't have to worry too much about any repercussions.)

The experience was fun though, and people who played it really seemed to enjoy it.  It's like a classic 16 bit RPG game in many ways - basically, you play Liz Madder, she gets committed to St Dymphna's, and the plot of the comic plays out in it as she explores the premises.  There are hidden items in the game, skeleton keys you can use to unlock chests and rooms, special objects... I even got as far as to have a boss fight.  I believe the file up there required further tweaking - the boss, I think, was a bit too easy, and in one environment there's a wall you can go through - plus, one item was a bit too powerful, but other than that, it plays pretty well.  The PC version I hear works fine, though people have had trouble with the Mac file (even though it was made on a Mac - weird).

I had Liz and the party fight vermin in the hospital - fighting other patients would be too ableist, fighting orderlies would be a losing battle systematically, and made no sense.  So basically you go around and knock the shit out of rats, centipedes, squirrels, and a rabid raccoon boss.  It's kind of hilarious, and there's medical lingo and terminology in the interface to add to the feel of things.  You're trying to stay out of locked seclusion, or avoid flatlining in battle, so it's game over if either of those things happens.

I was tempted to go back to school to study video game design while making this, but changed my mind.  I don't even like video games that much - making one was fun, but opening the third eye kind of ruined any kind of screen gazing for me, even movie watching (though I do enjoy films here and there).  So it didn't make sense to subject myself to an education where I would be behind a screen all the time, coding.  Also, some German knob on a game making forum criticized my coding, and I got frustrated with the whole thing.  I don't think I have the patience to deal with the dude bro culture of making video games - the dude bro culture of comics is bad enough, in the big leagues at least.  In indie comics, I don't see that much of it, not in Toronto, anyway.  (Also - I hate the idea of going back to school at all - it is such a punishing experience for me, I hate institutional learning... it's probably a lame Foucault reference to say so, but college and university remind me too much of mental institutions, and I certainly have had enough of those.)

Anyway, I guess I will be sticking with more "organic" forms of art from now on - they're more tactile, or something.  But this was a fun little experience.