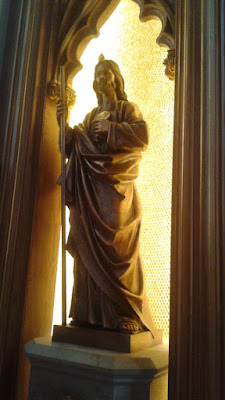 Today was my patron saint's annual feast day.  I went to the cathedral I regularly attend with some flowers to lay beneath his statue - a friend came with me to the mass.  I texted to him, as I waited for his arrival: "Yo - I'm the only one who brought flowers for St Jude!  This sure as hell ain't Mexico!"  It surprised me... even outside of Mexico he's kind of a big deal as far as saints go, and during mass he wasn't even mentioned!  Shame!

The liturgy was lovely, but then the priest had to suddenly drop some anti-abortion message into the sermon, to which my friend and I exchanged glances like "ugh... awkward!" because we're definitely both pro-choice... ahhhh, Catholics.

(The Panty Dropper was not the presiding priest today... glad I didn't have to hear his glorious voice utter such diatribe... that would be a major letdown, I'm sure.  T_T)

Later, we met his friends for some yummy burgers and went to the United Church for an organ recital, which was lovelier than it might sound to some people, but I started to fade because of too much wine from last night at a Hallowe'en party so I left during intermission.

(BTW, apparently Catholics pay more attention to the feast days of their saints on the Mondays that follow Sunday mass should a saint's feast day fall on a Sunday, I was told.  Bummer, man!)