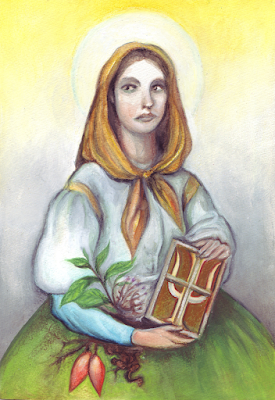 Here's one I did many years ago, of St Dymphna (the patron saint of the mentally ill), which was a potential cover for another variation of ideas that Asylum Squad might have gone in.  She holds here not the usual symbolism of this saint, but Tabernanthe Iboga plant roots and a DSM bible.  "Iboga" is a psychoactive plant known to cure addictions, and was going to factor into an alternative storyline I decided not to go with when I was redoing the series.  In the end, I invented the drug "Proniropol" (which is a play on the Greek word for "dream", imbedded in a word fashioned to sound like a drug that works with dreams).  The pharmaceutical company in the comic that produces Proniropol is called "Phrenopharm", and wouldn't you know, coming up with an original name for a pharmaceutical company that hasn't already been used somehow but sounds legit was next to impossible.  I wanted to go with "Pharmacon" but that was long taken!

(BTW, if anyone is trying to make sense of how to pronounce the horse demon's name, it's "ARM-ANNE-ANNE-STAN-TANOO", which was something that I channeled while under the heavy influence of my stupid little friend, and I thought it sounded like some weird paranormal creature's moniker.  Unfortunately, the spelling I went with made it a bit word salad-y.  But, being in a mental hospital as I was, I wasn't exactly thinking things through, and I certainly didn't think my comic would get as popular as it became, that is to say, a notch above modest.)

This piece was done with water soluble wax pastels on watercolour paper.  Maybe later I will post some more art that might have made it onto my last blog, but could stand to be shown again, regardless of it being related to spirituality or not.