Just in time for Hallowe'en 2018 - thought I'd do a rundown of some of my costumes from previous years that are somewhat relevant to this blog's themes.  I have already shown the Nataraja costume elsewhere, so here are some others of mine: 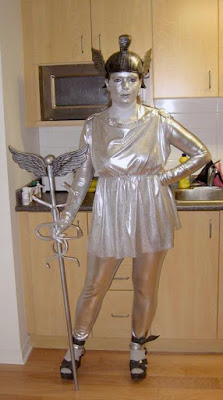 I believe this one was my 2014 costume - the god Mercury!  The bodysuit was some silver spandex thing I got at a sex shop, the toga made of more silver spandex, with some metal shoulder brooches and a silver cord around my waist.  The shoes were platform Vivienne Westwood Melissa sandals with wings on them, which inspired the entire costume.  The caduceus was made of a wooden dowel, the snakes on the staff made of old coat hangers with silver spandex covering them.  The ball on top was a foam ball, the wings made of cardboard - all painted silver with breakdown work in black.  The helmet was a Roman style plastic thing I added the cardboard wings to later.  I painted my exposed skin with silver body paint and wore silver gloves.  I went to a Wiccan Samhain event with some friends in this, then we hit up Church St for the annual Hallowe'en street party. 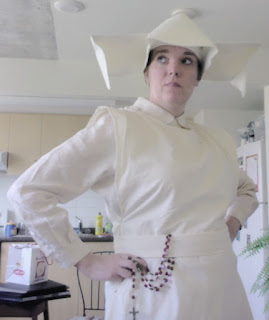 This was 2015 - I went as the Flying Nun.  (I certainly like dressing up like nuns - I swear it's NOT A FETISH... I just think it's cool!)  Only the older crowd seemed to get the reference.  That cornette was such a bitch to construct - I think I fiddled with it three times over in a major way until I got it to take the right shape.  The shirt was an off-white linen blouse, the habit portion made of off-white bedsheets I hand stitched into a kind of tunic.  The rosary hung from the belt, just a find at Value Village, along with most of the things that contributed to this costume.  I wore black leotard and some little brown shoes with it.  We took pics of me holding a bottle of alcohol and posing outside of a strip club in this. 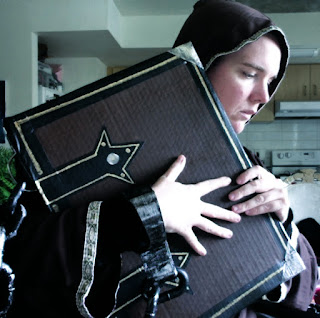 Here's some Neil Gaiman fandom - a group of us went as some of the Endless from comic series "The Sandman" in 2016.  I wanted to be Destiny.  We also had a Delerium, Dream, Death, and were going to have a Desire but she had to bail for health reasons, sadly.  The tome was made out of cardboard with two blank canvases from Dollarama pressed together for volume, paint, and duct tape, and the chain was a big plastic thing, also from Dollarama, the cuff made of cardboard, foil tape with black paint for breakdown work.  I got the robe from a Hallowe'en costume shop (a monk's robe) and sewed decorative trim to it, for some more detail.  Only one person figured out I was dressed as Destiny - not the most popular member of the Endless! 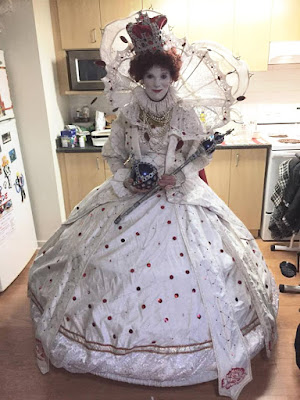 And now - for the grandest costume I have ever worn - Queen Elizabeth I!  This was last year's costume.  I did not make this - I am not skilled enough a costumier to craft such a thing... a friend of mine who is a drag queen made this, and he uses it for his drag and burlesque performances.  I dreamed of one day dressing as this monarch (one of my favourites from history), told him, and he mentioned he had this and loaned it to me, free of charge.  It was pretty crazy, the reactions I got while wearing this - I could barely move through the crowds.  Though I don't know all of the materials that went into it, I can say a lot of it was stuff from thrift stores and Dollarama, according to my friend.  I could not sit down or easily go through doorways with this on, I needed a friend to help me along through entrances, and down the street.  I lasted through 2 and a half hours of paparazzi madness on Church St before calling it a night.  It was a blast, but exhausting!

And this year I'm Sister Penance, the latex nun... so there will be pics going up later of that as well.  Stay tuned!