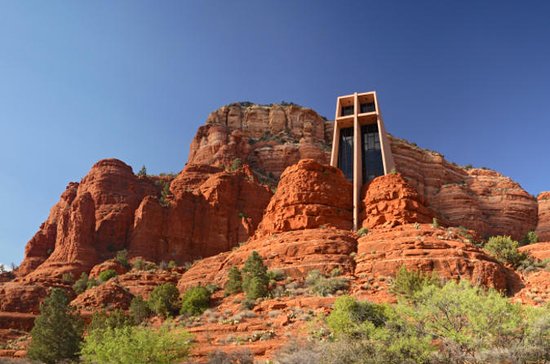 Two years in a row, I had the opportunity to visit Arizona for a winter vacation, not expecting it to be as fun as it turned out to be.  I'm not really into the cowboy thing, it's a very Republican state, but it's also a very raw, natural state, being one of the youngest of the lower 48.  Raw, natural beauty is something I admire much more than commercialism like Las Vegas, Disneyworld, or anything like that, so I decided to go with family to check it out, and get out of the Canadian cold.  And the best part of the trip, both times, was Sedona.

Sedona is kind of like a spiritual oasis in the middle of the state - I call it "Disneyland for hippies".  It is kind of touristy and that part is rather tacky about it, but it's among the most beautiful places I have ever been.  Red rock, big blue sky, this is the Arizona you often see on brochures, and it has been featured in various wild west films.  It's also home to the only McDonald's in the world with a green arch and no white letter sign, because they have strict bylaws preventing light pollution at night, so that the starry sky remains visible.

Why is Sedona so popular with seekers?  Because of what are called the "vortex sites" - special "chakras" or energy centres that people have been able to sense, or have interesting reactions to, when nearby.  The Native Americans knew about these sites throughout history, then in the 1960s the New Age movement got obsessed with them.  Even pilots, flying overhead, have a kind of a Bermuda Triangle thing happening with their equipment, so they have to "fly blind" over Sedona - whatever is there, it mucks with the navigation technology.  So yes, even the sciences are fascinated by this place.

The only vortex site family and I went to was that of the Chapel of the Holy Cross, pictured above.  (We went two years in a row.)  To test the validity of what I would feel, I went to the site and concentrated hard on not experiencing anything, but as soon as we stepped out of our car - WHALLOP!  It was like walking into the energetic equivalent of a sauna heat wall.  Suddenly my mother and I felt extremely mindful, tingly all over, and still, like we had just smoked the fattest joint in the world, minus the head trip aspect.  (My stepfather wasn't able to detect anything - it affects some people, but not all, and everyone in different ways.)  This was not placebo at all - it was intense.  (The feeling came back the next time we went back as well.)

Unfortunately, we could only do the Sedona part of both of our Arizona trips overnight at a Best Western before going back to the outskirts of the Phoenix area, where our home base was.  But someday, I really want to return to this amazing place, next time for at least a week.