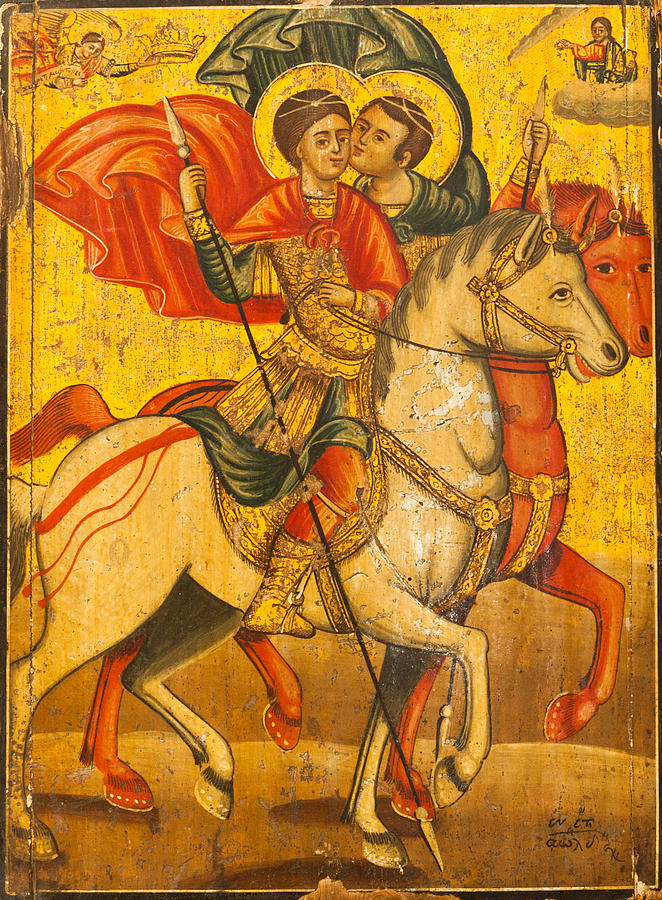 Christianity wasn't always so heavily affiliated with homophobia.  There was a time in history when same sex couples (at least, male same sex couples) could get a kind of partnership under Christ known as "Adelphopoiesis" (or "Brother Making") - this was a thing in Catholicism up until the 14th century, and in the Eastern Orthodox Church up until the early 20th century.  A famous example of this kind of pairing was with St Sergius and St Bacchus, pictured here, who were 4th century martyrs.  Some have argued that this form of partnership was completely devoid of any sexual connotations, but there's enough evidence to suggest that these two men were very much in love - including the line, when they were being paraded around in women's clothing before execution, that they weren't bothered by this, for they were both "Brides of Christ" (which, let's face it, is a pretty queer line!)

Other saints have been suggested as in some way LGBTQ+ - St Sebastian, to some, is the unofficial patron saint of gay men.  Derek Jarman even directed a film about him which had a lot of homoerotic imagery in it.  Also, some have argued St Joan of Arc might have been a trans man - when I asked Akasha about this in a card reading, it suggested that they actually were!

The Metropolitan Community Church in Toronto (which is an inclusive, progressive church, born out of the need to serve the LGBTQ+ community) once had a sermon which brilliantly shot down the arguments for every quote in the Holy Bible said to condemn homosexuality.  If I can find it again, I will post it.  (One thing I am reminded of that was in the sermon is that the word "homosexuality" once was synonymous with "pederasty", not love between two members of the same sex, and that while the definition changed over the course of history, the Bible didn't switch the connotation along with it, causing confusion.)