"Problem Patient... Against All Odds" 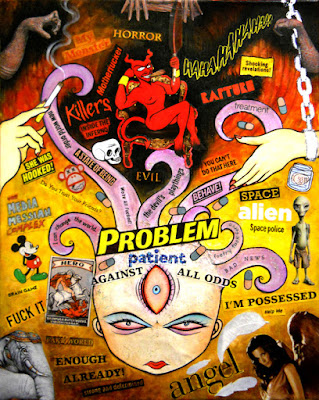 I made this at a Workman Arts collage class one time.  Kind of a fun montage of stuff based on the feelings that arose from my spiritual experiences.  This was made back when I thought that the root of my problem was some kind of third eye issue - certainly, Ajna had opened up (at least, Lower Aja did), but it was merely perceiving the nastiness, not generating it.

My "devil" is pictured here, the way he often appeared in visions - he looks a bit more androgynous here than he did for me at the time.  (BTW, there may have been a shift with all of that yesterday, but I will get to that in another post, when things are confirmed, if that is true.)