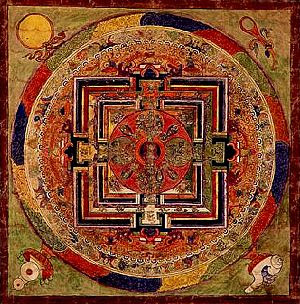 My spirituality began to get very interesting shortly after my Dad died last summer.  Within a day of the announcement of his passing, I suddenly got a channeled message that he was in my apartment with me, as a spirit, and I got a sense of his presence, without literally seeing anything there.  It was as though I had the same feeling I used to have of his presence when we'd meet for lunch.  When I got the sense of him, I turned and said "Shit, le merde!", which was one of his expressions, and then channeled his laughter inflections as a response.

For the next while, he would mostly be with me, though I would get messages that he was also visiting other friends and relatives, though none were able to sense him, except perhaps my aunt as well (his sister is very spiritual).  (It seems like weird psychic spiritual shit runs on my Dad's side of the family - my great grandmother, for example, although a proper High Anglican woman, ran a mediumship business on the side, in secret from her church.)  Because my Dad and I were friends as much as we were father and daughter, and we shared a dark quirky sense of humour about everything, I knew what to do - throw on some silly movies and internet videos and laugh about how odd the whole experience was!

So I put on my copy of Tommy Wiseau's 'The Room', my favourite bad movie of all time (one he had never seen in life), and channeled his laughter reactions throughout the whole thing.  Then we watched 'Team America: World Police' (which he also found funny) and then 'Troll 2' (which he just found stupid).  I also subjected him to hours of content from Everything Is Terrible until he said "ENOUGH!" - truly this was the strangest father daughter exchange we had ever had.

Eventually, I got the sense his soul was moving on, and when I did the math, it was indeed about the length of what the Tibetan Buddhists describe for Bardo.  Sometimes I still get a message that he's visiting me again, but he feels less close now than he was at that time.  I'm convinced it was a real thing, and it put my mind at ease a bit more about mortality.