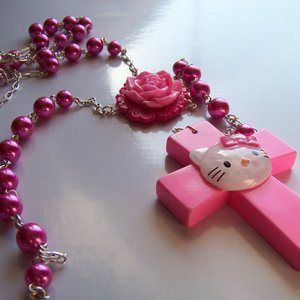 I've written before that, although from a more Protestant background, I feel strangely drawn, at least mystically, to Catholic environments and ritual, for at least part of my practise, the other part of it having a more "Bhaktic", Hindu bent - chalk and cheese, I know, but I'm still trying to figure things out, that's why I call myself a seeker.  So I will often hang out at a nearby cathedral, but I try to avoid mass.  Mostly I like it when it's an empty space, maybe a few people here and there, lighting expensive candles they have to pay to ignite and touching icons, leaving flowers and so on... I sit there and channel cool shit under my breath, do the rosary (with an app - still memorizing the Apostle's Creed!).  It's a lovely experience, but I always try to go after mass, or clear out before it starts.

I always feel kind of like I stick out like a sore thumb in there if I stay for mass, I don't know all the usual prayers so I just mouth them to look like I know what I'm doing.  I took Catholic communion a couple of times until my mother told me that was a bad idea, so I quit doing that.  I doubt I will ever go all the way and get baptized into this church because there's just so much I don't like, so I go to appreciate what I can, I go for the phenomena I get out of it more than anything, really.  (Also, there is a priest at the church I regularly go to that I have affectionately nicknamed "The Panty Dropper" because every time he sings in Latin, I want to put my panties in the collection plate.  Seriously, he could melt butter just by speaking - voice of a seraph, that one.)

One of the regulars, whom I call The NPC (because, like a video game NPC, they are almost always there in the same spot, and look like the sort you would harass in game until they give you a side quest to obtain a special item or something) once snarled at me for, I guess, approaching the host tabernacle (or whatever it's called!) without enough reverence, but because they see me there all the time now I guess I'm forgiven?  Yikes.  (I've learned to bow more, at least.)  <_<

Really, this might ultimately be a phase I look back on and laugh about, but it's one I want to keep exploring in my own way.  I have flip flopped on what my psychological / spiritual condition was before, now I might sound like I am doing it again only this time with religion.  Dogma drives me crazy so I might not last with this one, but I can still enjoy my methods, I suppose.  There's no rule that says I can't.