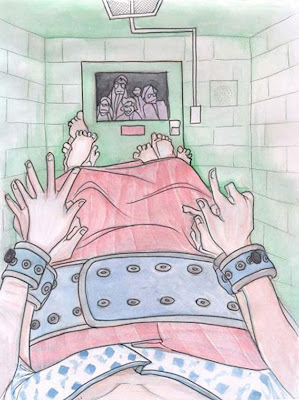 Losing control of your body to an unseen force is really, really terrifying, as anyone can imagine.  It wasn't a case where it was as though I was sleepwalking, or my ego consciousness was somewhere else so I wasn't witnessing what was going on - no, I was fully consciously aware as a bystander of everything, but it was like I suddenly felt more like a co-pilot in my body, rather than the chief pilot, at its worst.

The mind became so overtaken by the negative consciousness a couple of times that all logic and reason, and the ability to calm the fuck down, was taken away, and I was completely subjugated.  "Paranoid" delusions were so powerful I was their slave - looking back, some ideas were so absurd it was hard to remember or understand how I could possibly believe them, but my neurology was so complicated by things it just wasn't possible... at the very least, the fear that they could be true ruled my psyche.  (Visions and voices were less my enemy than fear was... fear could have me do anything if I was afraid enough.)

Sometimes I would have to fight to speak my word, rather than allow the dark consciousness to speak through me, so it was a struggle to override it when I fought it, and I'm sure psychiatrists saw this as a negative symptom of schizophrenia (there are positive symptoms and negative symptoms, not in the good and bad sense - that's just the names of how they categorize facets of the illness).  Often I would not leave my bed, not because of depression (which, oddly enough, I was not suffering from), but because leaving it made me feel vulnerable.  I know for a fact that my laughter at some of the pain and voices was interpreted as mania, and that being bedridden and slowed down was seen as depression, so they eventually concluded I had schizoaffective disorder, but neither of these examples was related to mood - I take no medication for mood at all.  The other reason they suggested schizoaffective disorder was because I seemed too "high functioning" for classic schizophrenia, due to my lack of negative symptoms (once I could speak properly again) and because of my ability to bounce back as well as I did, but that's just idiotic labelling, especially when one considers there was no mood component, which is kind of integral to diagnosing schizoaffective disorder.  Morons.

Psychiatric labelling is a bullshit pseudoscience because it's really just a way of making sure people get their medication.  There is no hard science to it - a doctor simply has to assess based on observation to dish one out.  From what I've been told, by law, a diagnosis must be given to prescribe (at least in Canada), so a DSM V label must be picked, and often doctors just go with one that sounds about right.  I argued that I should be categorized as having a Spiritual Problem, which is a real DSM category, but no one at the time listened - hey, what good did I know, right?  Some people take comfort in their labels, but I saw mine as a detriment to recovery, especially when doctors insisted things would never improve, at least not without medication.

Thank GOD I never got so out of it I lost continence - I could still shower, keep clean, eat somewhat, and clothe myself, as well.  But at its worst, it was pretty bleak, and there was no way I could fit in anywhere in society.  Friends dropped me like a hot potato, or at least backed away until I regained my footing.  It was one of the loneliest times of my life.  I'm glad it's ended, and I am enthusiastic about what's happening now.  (Sorry, this was another bleak post about the past - I'll try to keep things a bit more uplifting, if I can!)

(That painting was something I produced after about half a day in restraints at CAMH - when a nurse wanted it from me, I said "then pay up".  She didn't, but I made her a print of it with a photocopier, as she was one of the more decent ones.  Pen and watercolour on paper... it was featured in 'ASYLUM Magazine' one time, as their back cover.)