"I am going to show you up with my technology..." 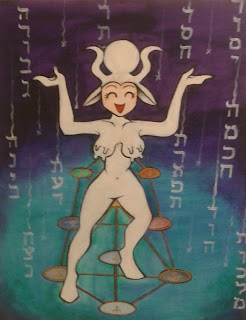 I recently sold this crazy piece, based on one of my visions, to a friend, who awesomely understood immediately that it was a kind of Hathor cow goddess / White Buffalo Woman character.

I had smoked a marijuana joint in Kensington Market and began to witness crazy cartoon visions in my Ajna chakra, and this was one of them.  (Yes, that's a Tree of Life DDR machine, and Hebrew script for the names of the sephirot falling behind the figure.)  I immediately put on some headphones and listened to a ridiculous happy hardcore version of "In The Hall of the Mountain King" and heard lyrics singing "I am going to show you up with my technology" overtop of the rhythm, while the Hathor girl danced on the Tree of Life in sync with it.  It was odd and breathtaking and hilarious... I now have very peculiar reactions to cannabis where my active imagination goes into overdrive, but because of spiritual complications from whatever assaulted me, I had to quit smoking it to stay safe.  (When I speak of active imagination, in this case, I am referring to the Jungian definition, where the imagination becomes a playground and one can actively engage with it.)  I kind of miss these crazy experiences, but it's not worth getting unwell again.  Some of what went into the Asylum Squad comics came from active imagination experiences with cannabis, or at least were influenced by them.  Trying to explain this phenomenon to fucking Freudian /Kraepelinian doctors was impossible, but my Jungian analyst gets it - in fact, he was the first to get me to learn more about it.

Anyway, here's the absurd song that was paired with this image: