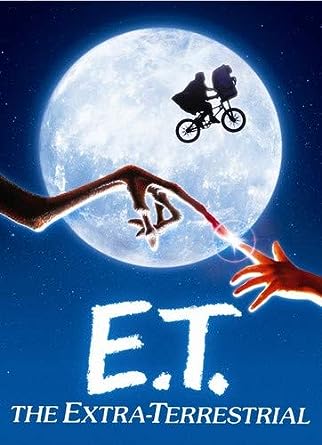 This is a film theory I have had about "ET: The Extra Terrestrial" for a little while now - I later looked the idea up, and others have suggested this as a thesis as well: "ET" is a Jesus movie.  Here's why:

Ok, so first off he comes to earth from "on high" (in this case it's in a spaceship).  He is a gentle, wise creature, he's pretty much too good for this world, and is highly misunderstood by authorities.  He has a message of goodness, in that he says things like "Be good" a lot, as he learns English.  He is also a healer, and there is a lot of religious symbolism, such as the image to the left of this text, where he and Elliot touch fingers, which is probably lifted from the famous painting "The Creation of Adam".  (Also, his glowing heart is very symbolic of the Sacred Heart of Jesus.)  He is captured, in this case by scientists, dies in their custody, but resurrects and emerges from the cryogenic "coffin" he is placed in.  Then, at the end of the film, the spaceship from his home planet returns, and he ascends.  What could be more New Testament than THAT symbolism?!  No wonder Americans love this movie... Spielberg knew exactly what he was doing.

This interpretation kind of just came to me one day, so I decided to look it up, and there are tons of articles where people have discussed this.  Some say the look in ET's eyes was based on the eyes of Albert Einstein, the eyes of pure wisdom.  I haven't seen this movie in ages so I bet there's more I'm not considering (I am also not much of a biblical scholar to be able to quote anything that could compare the film to the New Testament).

Maybe later I will do an article about how the original Super Mario Bros mythos is basically the Rama and Sita epic!  xD