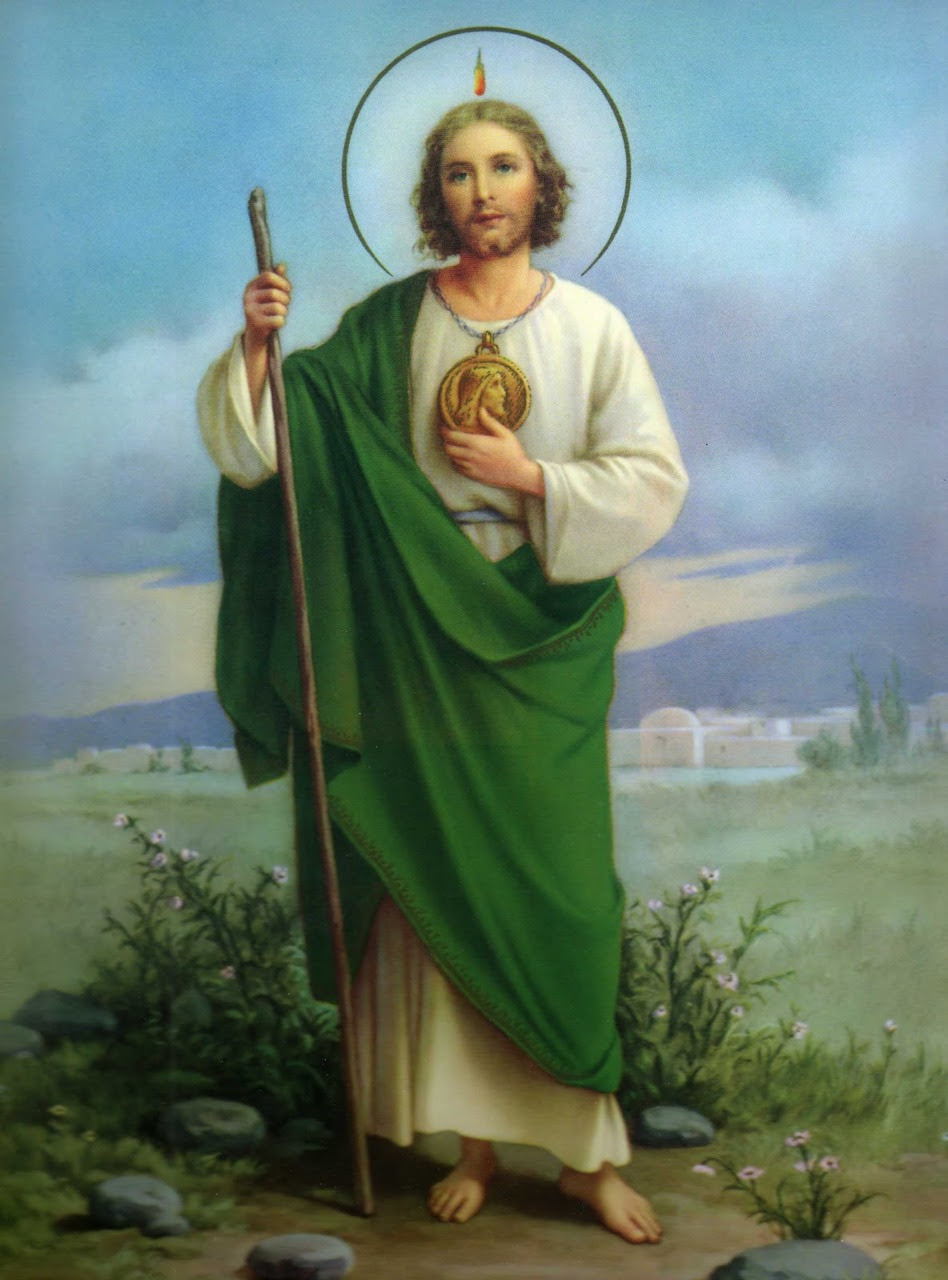 Apostle St Jude is basically my go to patron saint.  Though I am not of a Catholic background, my mother is, and growing up she'd always tell me about the various saints, St Jude being the one she'd refer to when it came to confronting life's problems.  So when I was in spiritual agony and felt I had no idea how to proceed (I was in a hospital at the time, my third eye region under excruciating torture, as though something was overwhelming it and pressing down on it) I reached out to this apostle for help.  Seconds later, an "apparition" of what looked like Arcangel Gabriel (or at least some angelic presence with a trumpet) appeared above my head, and within a day the edge began to wear off.  Pretty remarkable experience!

Unfortunately, not being from a spiritually disciplined background, I did not realize I had to keep praying, I thought that was it, and it took me a while to learn to pick it up again.  But St Jude, as I worked with him, has helped me in many respects - he curbed my smoking and marijuana habits by instilling in me a feeling of dread and nausea at the very thought of consuming either substance, and I was able to kick both habits at once, at the same time, during a severe bout of spiritual psychosis, something non-spiritual doctors are confused as to how I was able to do with sheer will at the time.  He eventually opened my heart centre to Christ, allowing for that watershed.  (Christ is someone I will get to later on - I don't exactly identify as Christian despite some of whom I pray to and the Catholic overtones to my ritual, but instead as a sort of Bhakti-style devotee.)

There is some interesting lore in relation to St Jude.  Because his name sounds so much like Judas Iscariot, there was at one time a fear that invoking St Jude would accidentally invoke Judas, so he was avoided by many Catholics.  I guess the saint himself was so relieved that people began to pray to him again that he has come to be known as one of the most helpful saints out there - he is known to help just about anyone, even drug cartel types.  (St Jude is the number one patron saint in Mexico, BTW, and because of the cartel drug lords honouring him he has unfortunately been co-opted as a kind of "narco saint", along with Jesus Malverde, Santa Muerte, and even Our Lady of Guadalupe, among others.)

I have a St Jude medal I wear around my neck, as well as a chaplet I turned into a bracelet, and a rosary a friend made for me with a St Jude medal hanging from it as well.  When I attend the cathedral I like to meditate in, I like to sit close to his statue.

Yep, St J00d is my d00d, and was the first holy figure I was able to invoke for aid.  His feast day is Oct 28th, and he is the patron saint of hopeless cases, among other things.