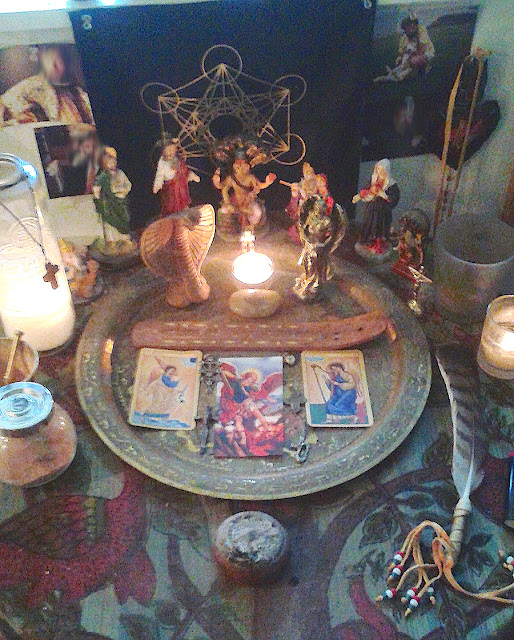 Here's a pic of my "Bhakti" shrine.  I like to honour various figures of Christianity, Hinduism, and several angels.  (Sorry this photo is so crappy... my phone camera is pathetic.)

As mentioned earlier, although I have a kind of "folk Catholicism" thing going on, I am more drawn to Hinduism in general.  The Bhagavad Gita speaks to me way more than the Holy Bible does... I also love The Upanishads.  But the writings of St Teresa of Avila, and other mystics, speak to me as well.  Perhaps I will do book discussions of various mystical writings later.  (BTW, if you want to get into the Bhagavad Gita, avoid the Hare Krishna edition - look for the Eknath Easwaran translation.)

Oh BTW, speaking of "folk Catholicism", I should include a link to this interesting video where a Santero discusses the religion of Santeria, it's fascinating.  (WARNING: There is an animal sacrifice towards the end, but the video warns of this beforehand, so if you're squeamish, just avoid that part.  I could never be a Santera... I squirm at the idea of animal sacrifice!)