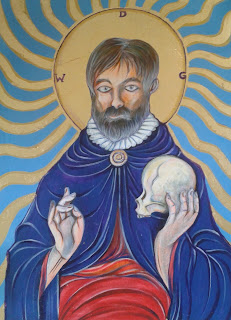 Recently I have gotten into painting people as patron saints, because of my obsession with religious art and icons.  When my Dad passed last year, I felt compelled to "canonize" him on canvas.  Here we have the resulting painting:

My Dad holds a skull here, both because he was a professional theatre type for most of his life, but also because he was "martyred" by brain cancer.  The WDG are his initials.  The rays radiating from the halo suggest a solar reference, as my Dad was a Leo, which is the sign ruled by the Sun.  The hand is in a "mudra" type gesture, common for many iconic pieces.  The gold here was done with imitation gold leaf, and the paints used were acrylics (I would have done oil but have no studio space for ventilation).

This painting was on display at his memorial, and I took to the podium to discuss it and recite a Rumi poem in his honour.  Unfortunately, being both stage fright and quite shaken by his passing, I choked up a bit, but people said they were moved.  This painting would later be briefly displayed at the Metropolitan United Church for their 200th anniversary celebration, because despite the fact that Dad was a lapsed Protestant, he loved the art, architecture, and music of Christianity, and would have been amused that he got to hang for a while in a cathedral like the Met.

Here is a link to the Rumi poem in question, as for some reason it will not let me type it into this without botching the HTML:

On The Day I Die